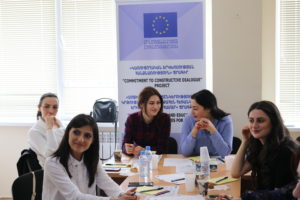 On March 29, a workshop titled “How to Work with CSOs and Cover the Educational Sector” was held with the participation of various reputable media representatives in Armenia at the Partnership and Training NGO’s Yerevan Office. The purpose of the training was to discuss with journalists the prerequisites and ways of CSO media interaction, to present the CSO field peculiarities. In the course of the training, the journalists were particularly briefed about the mission and activities of the Armenian Educational Network, in particular the VET features and current issues were also touched upon. A journalistic contest will also be announced among the participants of the training, promoting the coverage of existing reforms in the education sector in Armenia, the creation and dissemination of high quality journalistic stories, which will promote public awareness on the issues of education, in particular VET. he authors of the winning titles in the 5 nominations will be awarded cash prizes.

The winners of the journalist competition will also have the opportunity to present their stories to all stakeholders during the nationwide conference of VET in May 2019, as well as establish valuable business contacts and partnerships with industry experts. The Armenian Educational Network capacity development project is implemented within the framework of the European Union found ”Commitment to Constructive Dialogue” program. More about Armenian Educational Network, member organizations and implemented events could be fined at the official web site of the Network with the following link: